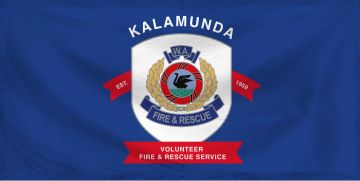 As part of this service, we protect areas of Kalamunda, Lesmurdie, Gooseberry Hill, Walliston, and sometimes assist in surrounding areas.

We can be responded to anything from a smell of smoke in a house, to scrub and bush fires, traffic accidents, hazardous materials incidents, and on the rare occasion, an exploding fireworks factory.

We have also attended large fires as far as Albany, Serpentine, Neerabup, Dwellingup, Whiteman Park, Parkervile/Stoneville and Northcliffe. This usually involves only our Light Tanker, or a second light tanker which has been assigned over the summer months, but we have had full turnout under emergency conditions to Neerabup in 2001 and Parkerville/Stoneville in 2014, as well as other out of area responses.

In 2013 we also attended a hazardous chemical spill at Mundaring water treatment plant.

Over the years we have also sent members to the eastern states.  More recently we have sent members to be a part of strike teams in Queensland and NSW during some of teh worst ever bush fires seen in Australia.

Our station is located in Central Rd, Kalamunda. This is in the hills, about 25 minutes drive east of Perth. Our response area is surrounded by National Parks and other bush and scrubland, providing a high risk in the bushfire period, and a large number of incidents involving these areas of native vegetation.

These competitions provide an exciting challenge for the firefighters involved, as well as the opportunity to discuss and learn about new skills, equipment and techniques, which have been brought back to the community and assisted in many incidents the brigade attends. For several years, Kalamunda VFRS has participated in a new service competition being introduced to the more traditionally oriented Easter Championships.

The service competition involves performing tasks that are currently being used in service, racing against other teams and the clock. The competition has been changed several times, trying to determine the format of the event for the future. Kalamunda has an extremely good record in this competition and looks forward to seeing the event grow. Members also attended the National Firefighting Championships held in Queensland in 2005. This was the first time that the National Event had included teams from Western Australia, and while the team did not bring home any prizes, the team performed well, and showed some promising skill against formidable competition. The next Championships were held in Lakes Entrance in Victoria in 2007 and team from KVFRS brought home a prestigious gold medal in the Pump Suction Event.

As volunteer firefighters, we do... what we can, when we can, where we can, if we can and to the very best of our ability.

This is an excellent place for you to add a paragraph and let your visitors know more about you and your services. Easily edit by go to tab pages and content and click edit.

© 1959-2020 Kalamunda Volunteer Fire & Rescue Service (KVFRS) / Kalamunda Volunteer Fire Brigade (KVFB). Material on this site may include views or recommendations of third parties, which do not necessarily reflect the views of DFES or the State of Western Australia. Photos or text may not be used without permission.
Home | About Us | News & Event | Download | Links | Contact Us